Should You Open Windows During A Fire? Is It A Good Idea?

Hopefully, you are never inside a burning building (unless you are a firefighter), but if you ever find yourself in a structure that is on fire, will opening the window help? This is a good question and the answer is not as straightforward as you may assume. So, is it a good idea to open a window during a fire?

Opening a window during a fire is not usually a good idea. This allows for increased oxygen to fuel the fire and can cause an increase in heat and the rate of fire spread. The only time it may be a good idea to open a window, is if that is the only way for you to safely escape the fire.

Lets take a look at what happens when a window is opened during a fire, why they are usually best kept closed and some reasons why firefighters will sometimes break windows while fighting a fire. Here’s what you need to know.

What Happens If You Open A Window During A Fire?

The problem is that you don’t know what will happen if you open a window during a fire.

This will depend if the fire is limited by its fuel or by the amount of oxygen it has available.

It might be nothing at all, you pop open the window and a gentle breeze enters the building and the person inside gets a little fresh air.

They might even be able to climb out of the window and make their escape (assuming they are at ground level – jumping out of upstairs windows is likely to cause as much or possibly more harm than the fire).

Note: If your only way out may be a window above the ground floor, getting a fire escape ladder and having it ready could be a life-saver.

But these are best-case scenarios and there is no way to tell from the outward appearance of a blaze that this is what’s going to happen. In fact, it’s far more likely that you might cause the people inside the house major problems and in an instant too.

You see when you open a window, you provide a route for air to travel in and out of. Fires need oxygen to survive and continue burning. If the fire gets more oxygen from an open window, many times, this will cause an increase in fire activity. 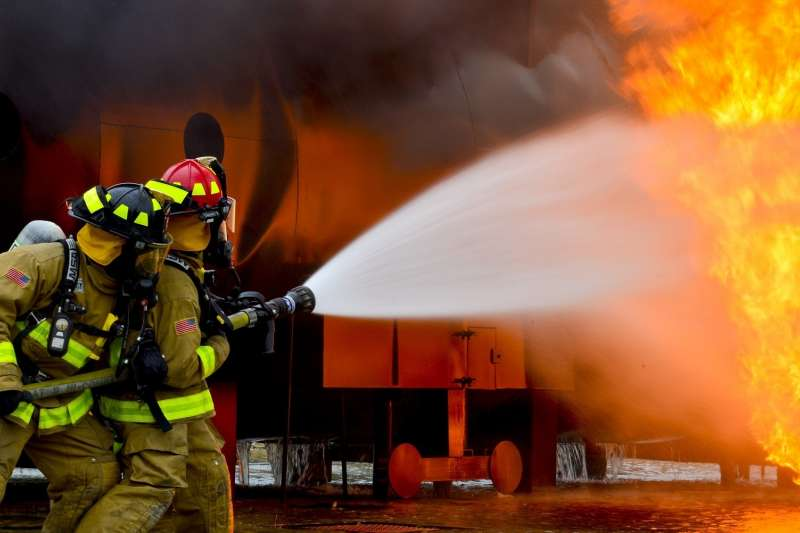 Why Should Windows Be Kept Closed During A Fire?

When you open a window in a fire, that new route for air to travel can be very dangerous, indeed.

Firstly, smoke can be attracted to the airflow and the room that the person is in may fill with thick, black smoke and quickly overwhelm them.

Smoke can be pulled under or around doors, so, even if the door is closed, this can be a possibility.

You may also encourage the fire to spread in the direction of the new flow of oxygen coming in through the open window. That means the fire is going to pull towards a room, potentially, that has people in it.

This is simply not a good idea. So, whenever possible, you want to keep windows closed until the fire department arrives.

When Can You Open A Window In A Fire?

If the smoke and flames are getting close and there is no way out of your home or building except via a window, then it’s time to take action.

In these instances, you want to close any doors into the room first. This will help to slow down any rush of smoke to the room if opening the window results in drawing smoke from the rest of the building and it will act as a temporary fire break.

Be aware though that a ground floor window may offer an excellent escape route to the outside, but windows on higher floors, typically, do not, unless there is some way for you to get to the ground safely (such as a fire escape ladder) or unless there’s a balcony you can stand on to wait for help to arrive.